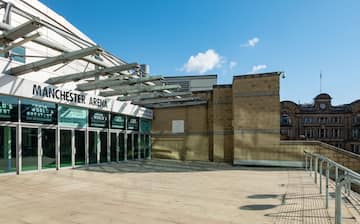 Where to stay near AO Arena?

Other landmarks in Manchester City Centre

Find out more about AO Arena

Where is AO Arena?

AO Arena is located in Manchester City Centre. It's in a welcoming neighbourhood well known for its theatre and bars. If you'd like to find things to do in the area, you might want to stop in and see Old Trafford and Manchester Cathedral.

Where can I stay near AO Arena?

We've got 418 hotels you can pick from within just a mile of AO Arena. You might want to consider one of these options that are popular with our travellers:

Things to see and do near AO Arena

What to see near AO Arena

Things to do near AO Arena